The legalization of marijuana has been spreading rapidly. Many technologists in Colorado, where recreational use is allowed by law, mistakenly believe that the topic is now cut and dry. In reality, changing laws surrounding marijuana have created a massive gray area that is causing confusion for job seekers everywhere. It may be medicinally allowed in 34 states and recreationally legal in 10 states plus Washington D.C., but marijuana in the workplace is altering employment trends that can affect your job prospects and career. 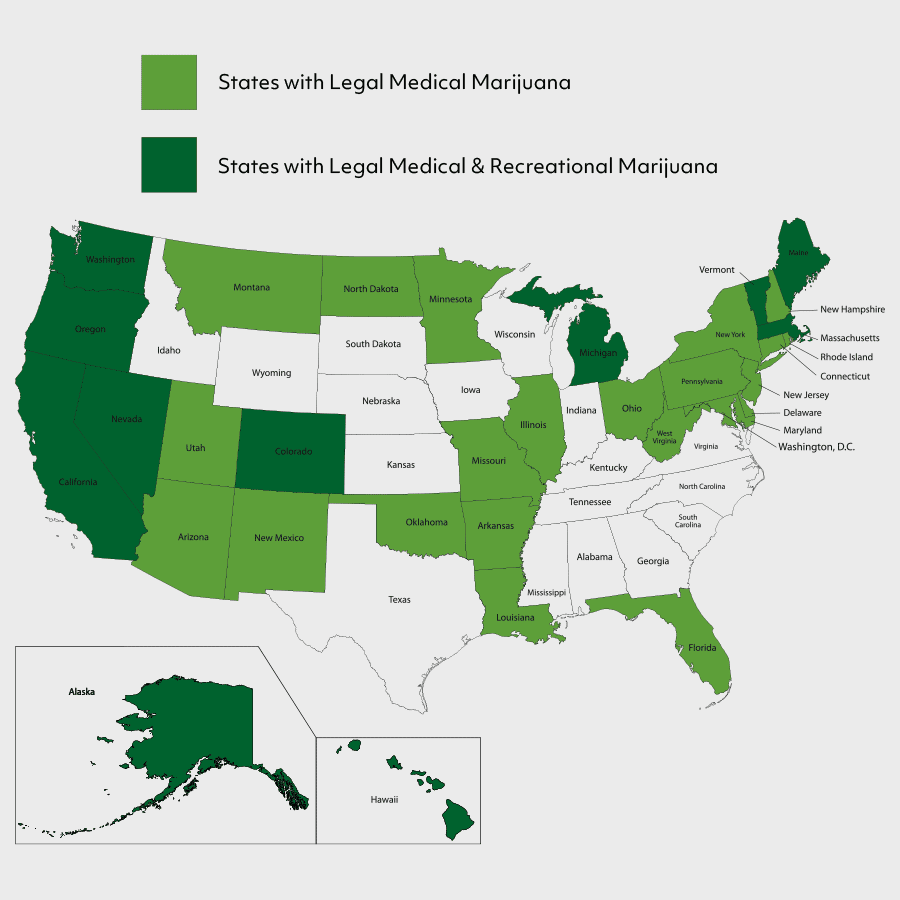 If recreational marijuana is legal in your area like it is in Colorado, that doesn’t mean you can freely use it with zero consequence. Just as laws prevent the consumption of weed in public areas or driving under the influence, many employers have further policies that dictate what’s allowed for their workforces. Most notably, Colorado companies may still prohibit marijuana use by their employees because it is still illegal on the federal level.

This is best summarized in a direct quote from the text of the Colorado law: “Nothing in this section shall require any employer to accommodate the medical use of marijuana in any work place.” That’s why a 2015 Colorado Supreme Court case ruled that employers could even prohibit medical marijuana use by their staff. Furthermore, while some states like Arizona protect the medical side of the coin, there is no law anywhere that forces employers to tolerate marijuana consumption while on the job.

Given the state of the law, it may not be a surprise that THC is one of the most common drugs screened for in a standard 7-10 panel employment drug test. When employers have strict policies against the use of marijuana, a drug test could singlehandedly make or break a job opportunity. Even when employers don’t have a documented policy and THC shows up in a drug test, it still matters. Just like a questionable picture a potential employer sees on your Facebook page, it could still ultimately affect their hiring decision even if you didn’t do anything illegal. While some employers may not care, it’s unlikely to be a further motivator to hire you.

Employers are Not Adapting Quickly

Employers are starting to grapple with what legal marijuana means for their hiring practices, and although some are starting to become more open-minded, a surprising number of Colorado companies are not currently marijuana-friendly. This places technologists who enjoy marijuana in a difficult position. When you interview with a company without a clear drug use policy, asking if they allow marijuana use can feel like giving away the fact you enjoy it, which could affect their decision. Of course, if marijuana use is so important that you would not want a job that prohibits it, that’s fine, but it will limit you from obtaining some of today’s most exciting technology roles.

There are several reasons why employers are slow to adapt, and most of them boil down to liability. Since the federal government lists marijuana alongside heroin as a schedule one drug, employers are frightened. There are huge implications for workers’ compensation claims if marijuana is found in the bloodstream after an accident. Many insurances don’t cover medicinal marijuana, which can make benefits administration a challenge. Finally, while Maine stands as the only state that prohibits employers from firing workers for recreational marijuana use outside of the office, the courts everywhere else consistently side with employers when employment laws are challenged.

If You Fail a Drug Test

Marijuana is often compared to alcohol, and for good reason; both can impair the senses, and very few employers will tolerate consumption in the office. Outside of federal law, the key difference is that alcohol leaves the system more rapidly and doesn’t show up on standard drug tests.

For technologists, it’s best not to leave anything to chance. If you’re asked to take a drug test during the interview process, it’s a natural time to ask about the drug use policy. Should a potential employer have a zero-tolerance policy and you’re certain you’ll fail the drug test, have a frank conversation with the hiring manager. Whether you want to cut marijuana out of your life for this opportunity and ask to delay the drug test or you wish to politely decline the job, being proactive is the smart move.

If your current employer asks you to take a drug test, then it’s time for similar conversations. If you know THC will show up in your test, talk to your supervisor, HR rep, or anyone you’re comfortable with. Ask them about a way forward that everyone can agree with. Ultimately, while federal law still outweighs state law and a gray area exists, you’re going to have to ask yourself how excited you are about a job vs. how much you value your marijuana consumption.

With marijuana legalization spreading, there’s no doubt that society’s collective views on weed are evolving. However, true change takes time; legislative reform and corporate policy changes don’t happen overnight. Technologists like you are in extreme demand and employers will eventually have to accept marijuana use in order to stay fully staffed. For now, until federal law changes, the burden is on you to use your discretion and think carefully about how marijuana may affect your next job opportunity.

As Denver’s premier technology staffing firm, we know which employers tolerate marijuana use and which don’t. Let us connect you to the company that’s the right fit for you.

What Happens When an Employee Becomes a Caregiver?

This website uses cookies to improve your experience while you navigate through the website. Out of these cookies, the cookies that are categorized as necessary are stored on your browser as they are essential for the working of basic functionalities of the website. We also use third-party cookies that help us analyze and understand how you use this website. These cookies will be stored in your browser only with your consent. You also have the option to opt-out of these cookies. But opting out of some of these cookies may have an effect on your browsing experience.
Necessary Always Enabled
Necessary cookies are absolutely essential for the website to function properly. This category only includes cookies that ensures basic functionalities and security features of the website. These cookies do not store any personal information.
Non-necessary
Any cookies that may not be particularly necessary for the website to function and is used specifically to collect user personal data via analytics, ads, other embedded contents are termed as non-necessary cookies. It is mandatory to procure user consent prior to running these cookies on your website.
SAVE & ACCEPT